In 2016 the Oskaloosa City Council and local property owners submitted a grant application to the Iowa Economic Development Authority (IEDA) for Downtown Revitalization Program Community Development Block Grant (CDBG) funding. The focus was to eliminate "slum and blight" in downtown Oskaloosa by completing important building facade repairs and storefront improvements while respecting historic character.  The grant was awarded and construction began in 2017.  The success of this first phase led to a second grant and construction phase, which began in 2019, and also a proposed third phase for 2021-2022.  Additional information on each phase can be found below. 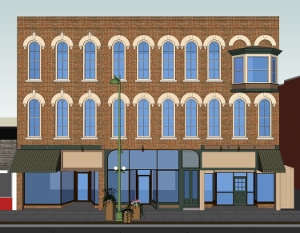 Phase I (2017-2018) - Project Description
The project included restoration of the façades of eighteen (18) downtown buildings on the north side of the Oskaloosa town square. Buildings include a mix of non-historic and historically significant buildings within the Historic District. The buildings included in the project were identified through a formal "Slum & Blight Survey" and were deemed in need of repair. The designs for the façade restoration were prepared by Curtis Architecture & Design (project architect) and have been approved by the Oskaloosa Historic Preservation Commission and the Iowa State Historic Preservation Office. Funding for this project comes through the City of Oskaloosa, a Community Development Block Grant through the Iowa Economic Development Authority, the George Daily Family Trust, and property owners. See facade designs (PDF).

The construction contract was awarded to Christner Contracting LLC, and construction was completed between May 2017 and August 2018.

This second phase is similar to the first phase, but focuses on six (6) buildings directly west of the town square. Buildings were selected through a similar method as the Phase I project and the work will include similar types of repair. Curtis Architecture & Design is again providing the architectural services for this project, and facilitating the Oskaloosa Historic Preservation Commission and the Iowa State Historic Preservation Office approval processes. Funding for this project comes through the City of Oskaloosa, a Community Development Block Grant through the Iowa Economic Development Authority, and property owners. See facade designs (PDF).

The construction contract was awarded to Cornerstone Commercial Contractors, Inc. of Corning, IA.  Construction began in August 2019 and is expected to be complete in September 2020.

A third phase is proposed for six (6) buildings (11 facades) on the south side of Oskaloosa’s town square.  The estimated project cost is $965,000.  A grant application to IEDA was submitted in July 2020 and announcement of award received in September.

Phase III is programmed but not yet fully funded for construction.  We have been notified that our CDBG grant application has been approved for $500,000.  The project team has finalized the design concepts, secured commitments with property owners, and is currently negotiating contracts and documents to proceed with design and formal review. Construction is expected to begin in Spring 2021.