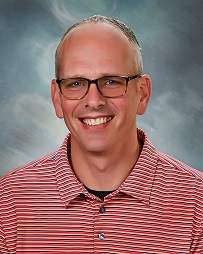 At the June 18, 2018 city council meeting Drost was appointed by the City Council to complete the unexpired term of Tom Jimenez which ended December 31, 2019. In November 2019, Drost was elected to serve a four year term ending December 31, 2023.

Drost was born and raised in Oskaloosa, graduating from Oskaloosa High School in 1991. He graduated from Iowa State University in 1995 with a Bachelor of Science degree majoring in Agricultural Business Management. His work experience has provided opportunities across many disciplines including investments, sales, finance and facilities.

Drost has been employed by Musco Sports Lighting since 2000. After serving in financial roles for 18 years, he is currently the manager of facilities development.

Drost serves on the Mahaska Community Recreation Foundation Facilities Committee and the Mahaska Chamber Housing Committee.  He is a member of the Third Reformed Church in Pella serving on the hospitality team, as well as the leadership team for Baja 201, a missions group building houses and relationships in La Mision, Baja, Mexico.

As a native of Mahaska County and city resident since 1996, he has an interest in the healthy growth and sustainability of the Oskaloosa community and region.

Drost has been married to Cathy since 1995. He has a daughter, Ashley, and a son, Taylor.